Linking to time off scheduler
Posted by lyndon at 6:48 PM No comments:

I was going to post some circuit diagrams to illustrate the concepts I discussed in the last post. But for simplicity's sake I'll just point you guys at the website (still under construction: how 90's!) that has them, so go here.
Posted by lyndon at 12:05 PM No comments:

Power to the people

Besides their insane efficiency, one of the biggest differences between LEDs and incandescents (hotwire) lamps is how they are powered.

Incandescents are voltage-driven devices. What this means is that if you take a 20Watt lightbulb that is designed to run on 12 volts and connect it to a 12V car battery, it will take as much current as is required to consume 20 Watts of power and stay at that level of consumption.

LEDs are different: they are current-driven. If you were to take a 3W LED and connect it to a car battery, it would glow very brightly for a few seconds and then go up in smoke. This is because the LED is designed to be fed a certain amount of current. If instead we power it with a voltage source with an essentially unlimited amount of current available, it will take all the current it can and maybe burn up.

We can either supply the LED with a constant current from a regulated current source, or we can supply a voltage (like a battery) and limit the current somehow. This current limiting is often provided with an electronic component called a resistor.

The purpose of a resistor is to provide a resistance to current flow. Resistors have a specified resistance that's measured in ohms and a maximum allowable amount of power measured in watts. For our purposes, standard 1 watt resistors will normally be fine. So how much resistance do we need?

The formula for calculating the safe resistance for an LED circuit is this:
ohms = (Battery volts - LED volts) /LED current
For example, a 1Watt LED normally consumes 0.35A of current at a voltage of 3.2V. That means we need at least 3.2 volts across the LED for it to illuminate at it's rated lumens. Let's use three AA cells to make a 4.5volt battery. So the resistor value would be:
ohms= (4.5 - 3.2) / 0.35
That equals 3.7 ohms. 5 ohms is a commonly available value for resistors, so we'll choose that. It's always safer to go a bit higher than the calculated resistor value and let it run a little dimmer. Going lower may result in too much current through the LED and that can shorten its life.

You may ask where the "missing" 1.3 volts from the battery went. Well it is dissipated by the resistor as heat. The LED will also dissipate some of its energy as heat, so we will need to be sure it is attached to a surface that can remove that heat. Such a surface is called a heatsink. There are purpose-built heatsinks, but often the LED can be mounted to a convenient metal surface that will let heat move away from the device.

In a future post we'll look into a simple way to build a current regulator that will give better performance than a fixed resistor.
Posted by lyndon at 9:23 AM No comments: 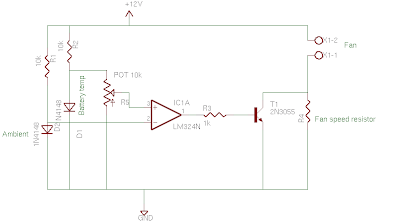 This is a bit offtopic, but I'm posting this as a followup to my Sparkfun post since I'm too lazy to figure out how to post pictures there right now :-)

This is a differential temperature controller I designed a few years back. Honestly, I don't remember much about it other than I did it quickly at someone's request and tested it on my lab bench. Can't even remember who the guy was other than to say it was used to speed up a cooling fan on a battery pack when the battery got a certain amount of degrees hotter than the ambient air.

Normally the fan runs continuously with its speed controlled by a fixed resistor. When the temperature differential is exceeded, the transistor shorts out the resistor and the fan speed increases. Notice that it doesn't use hysteresis about the setpoint for example. Also, it isn't a true differential controller since the battery sensor output is made to be a fraction of the ambient sensor output instead of simply the difference between them. It's meant to be an example to start from, not the final item. So have fun with it.
Posted by lyndon at 12:46 PM 1 comment:

Before we get back to playing with "normal" LEDs, let's take a slight diversion.
On a boring Saturday afternoon, we take an empty Altoids tin...

Add a high current LED, battery and a switch and voila...

It's difficult to convey just how bright this light is. I had to stop the camera down or it would photograph a white blur. Suffice to say, it's painful to look directly at the LED. It does make a simple gimmicky flashlight though.
Posted by lyndon at 5:08 PM 1 comment: The simplest way to use an LED is shown above. This is a standard white LED (rated at 20 milliamps) directly connected to a power source: in this case a 3Volt Lithum cell. It's not superbright, but a lot of small flashlights work this way and it puts out enough light to see your way in the dark. It's called direct drive because there are no electronics between the LED and the power source and if you choose the LED and battery/cell carefully, it's a great way to do smaller lighting projects.

This method also works with high power LEDs; you just have to be careful not to use too large a battery or you can overheat the LED which will destroy it.

In the next post, we'll look at more common ways of connecting LEDs to power sources.
Posted by lyndon at 4:56 PM No comments:

So, why did I create Yet Another Blog?

Lighting is one of those areas where art and engineering converge. Light is both useful and expressive at the same time and it lets me explore my creative as well as my technical side.

LEDs make playing with light easier than any other technology around today. They're "Green" in that a huge amount of light is produced for a small amount of electricity and that efficiency is constantly growing by leaps and bounds. Their tiny size makes it easier to fit them into smaller projects allowing us to work in scales from the microscopic to the truly huge.

So hopefully this will be a way to share my work and knowledge with the rest of the world.


We'll talk more about how to use LEDs than the technology itself. New types of LEDs and increasing efficiency is interesting, but actually putting them to work is a lot more fun! While LEDs by definition require electronic circuits to work, those circuits can be very simple and effective. I'll try to avoid complicated diagrams where possible and if I make things too difficult, hopefully I can rely on you, the reader, to smack me back down to reality :-)


If you're not technologically inclined, that's fine. I'd love to communicate with artists, hobbyists, experimenters in addition to those in industry. So make comments, ask questions, give me suggestions: I'm open to all.
Posted by lyndon at 9:21 AM No comments: